Things to Do in Cape Verde – 31 Top Attractions 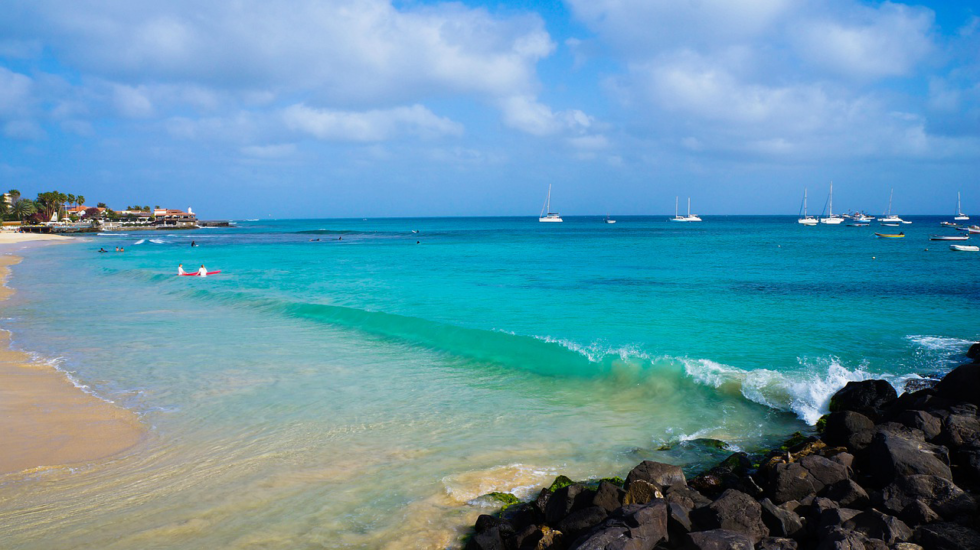 31 Top Things to Do in Cape Verde

Made of 10 dynamic charming islands, Cape Verde is a little country placed in the central Atlantic Ocean. With remarkable beaches, best hiking areas, cute towns and scuba diving places, it is also a piece of paradise for every person who loves the outdoors. Discover the top things to do in Cape Verde.

Here we highlight some of the top things to do in Cape Verde:

Another charming beach on Sal is Ponta Preta Beach. It is also in the north, but on the west side of Sal. This beach is similar to Santa Maria beach with charming and soft turquoise water. But it is less crowded and has a more natural landscape. If you are looking for more tranquility than this beach is best. From Santa Maria, you can walk approximately twenty minutes or take a taxi for a couple of euros to go this beach.

Enjoy a big range of relaxing beach activities at Praia de Santa Maria, where a stretch of golden sand reaches in the area of peninsula and far into the turquoise sea. If you snorkel, you are likely to spot moray eels, fish, and turtles. Many nearby hotels, resorts, food huts, and restaurants offer amenities for visitors, while an improve beach market serve up souvenirs and fresh seafood. Due to its length, the beach also makes for perfect jogging opportunity. Arrange to visit Praia de Santa Maria and this is the best things to do in Cape Verde.

Placed right in the heart of the island, Assomada is the biggest city in the area of Santa Catarina. It lies at approximately 550 m elevation on a plateau bordered by farmland, mountains, and hills. It is an amazing town with a big African population and it is also house to the biggest local market on Santiago. To soak in the colors and energy, go on to the central market of the island on Wednesday and Saturdays.

This is the oldest place of Cape Verde and things to do in Cape Verde, having been established in 1462. It was here where the history of the archipelago begun. After the Portugese established port here, Cidade Velha became a trade center was a center for the slave trade.
Sao Felipe Fort was built in the sixteen century to save the Portuguese against pirates and other enemies. On the road to the fortress you can view the pillory of the salves, the ruins of the churches and cathedral. You will also find the first church to be build in West Africa just a little walk from town. The place is now an official UNESCO World Heritage place.

The interior of Santiago is crisscrossed with hiking tracks that eaves their way down and up the steep slopes and into little communities and villages. Some of the top areas to hike are in the Serra Malagueta National Park and in and around the highest peak islands, the Pico d Antonia. These places are blanketed with achadas and flat-top lava rock mountains, as well as rich vegetation: euphorbias, Acacia and figs are extremely general here since the soil is quite moist.

This dynamic volcano which makes up most of Fogo Island is a famous hiking place. From the village of Chas de Caldeiras, it takes approximately three hours to reach the crater of the volcano which is the top point in Cape Verde. Anyway, it will take approximately thirty minutes to come down the volcano as you actually run down the mountain with no danger of hurting yourself on the lava ash. The wonderful views of the mixed colored landscape provided from the top are value the climb.

Cha das Caldeiras is the Cape Verde highest village and best things to do in Cape Verde placed in the crater of the dynamic volcano Pico do Forgo on the Fogo island. Seventy-five percent of the village are damaged in 2014 when the volcano erupted, but although many of the locals moved away after the corruption, the village is still populated. The area is popular for coffee and the domestic wine which is produced from the grapes which grow at the volcano foot. The Count of Montrod from France is said to have brought the primary vines with him when he stopped on the Fogo Island on his way to Brazil.

To experience the best of Cape Verdean culture, Mindelo Sao Vicente island is where you should head. This traditional town packed with colonial architecture, cafes and restaurants is house to some of Cape Verde famous musicians. Mindelo comes to life at night with dynamic music being played at most restaurants and bars. During the day you can try out the Sao Vicente beaches which are very advised for windsurfers. The natural lagoon in Baia das Gatas placed on the north of the island is a best location for swimming.

Santiago is the biggest island in the archipelago is house to Praia, the Cape Verde capital. It is the most African of all the Cape Verde islands and is a melting pot of cultures. The island has dark history as the old capital once served as the key trading point for salves between Africa, America, and Europe. Much like the Santo Antao island, Santiago also has some remarkable hiking routes and locations to explore. To experience the domestic culture begin your walk for either of the dynamic mountain ranges from Assomada as it will provide you a chance to mingle with the locals and get a feel of life on the island.

Santo Antao, the second biggest island of Cape Verde is in quick contrast to the islands of Sal or Boa vistas as the area of green which covers the land is far removed from the golden sands of the other islands. There are lots of hiking and sightseeing choices on the island. For the more active, the guided treks lasting a few hours will take you via the charming terrain of the area. From cliff-hanging towns to rocky sculptures and rugged mountains, there is a lot that you can experience one of the lots of hiking routes.

Boa vista is the 3rd biggest island of Cape Verde and things to do on cape Verde and the most barren of all the islands with more stretches of golden sand than greenery. The beaches here are actually the key attraction, but the Ervatao beach on the southeast coast is extra unique as it is the nesting place for the loggerhead turtles. If you are in the place between the months of July and September be sure go to this beach to witness the turtles coming in from the sea to nest and lay their eggs. From the nesting location, you can also view the shipwreck of Cabo Santa Maria.

Discover a big part of Sal salt history at Pedra de Lume. The old dynamic crater has a charming lake and a big expanse of salt pans that were started in 1796. You can visit the salt flats and also see the big conveyor system which was used to transport salt at 1 time. If the dead sea is on your bucket list of locations to visit and things to do in Cape Verde, you can have a trail of what it feels like to float in a salty expanse by taking a deep in the pool at the Pedra de Lume.

This beach paradise is one of the most famous islands for visitors who come here to enjoy the domestic culture and relax on the amazing beaches. The capital Espargos is placed at the center of the island but much of the activity occurs along the golden beach, island south. Water sports lovers can have the time of their snorkeling, live diving, jet skiing or wake boarding. Sal is also one of the more barren islands of Cape Verde with a big expanses of dry dessert.

Pezi Huber windsurf center, is placed towards the east of Santa Maria, directly on the beach in front of the Leme Bedje hotel. During the months of November to April, Sal Islands has near best situations for windsurfing and our place takes benefit of these favorable situations. There are chances for beginners to take themselves to the next stage with experienced instructors.

Maio in Cape Verde is the east most of the Sotavento islands and provides some of the amazing tourism for the bird lovers. Maio is the best location to escape, relax and enjoy bird watching. Some of the amazing birds on the island contain the seabirds that are general in the northern part of the island.

Riberia Brava is a vital commercial town in Cape Verde and best things to do in Cape Verde, the trade town is set in one of the most amazing sceneries of the Sao Nicolau island. Its placed within the Riberia valley provides best views of the surrounding mountain range and the river Riberia Brava flowing via the valley.

The city of Praia placed on the island of Santiago is a vital visitor center in Cape Verde. Praia is house to some historical landmarks including buildings and museums of traditional architecture.

Sal Rei, placed on the Boa Vista island is a special shopping center mainly for domestically made crafts and artworks and best things to do in Sal Rei. While exploring the sights, wonders, and sounds of the island, stop by one of the many souvenir shops in Sal Rei and picks up some memorabilia.

Discover more fun activities and the best things to do in Cape Verde.